My updated and expanded monograph, LaVerne Lantz -- An Architectural Biography, is now available on iBooks. This is Apple's book ap, also known as Apple Books or Books. If you have an iOS device (iPhone, iPad, Mac) the ap is available for free in the ap store. Find this book by searching Michael Knorr or LaVerne Lantz. 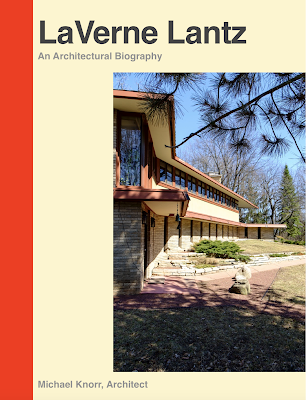 This monograph was originally inspired by a tour of architecture in southeastern Wisconsin by Frank Lloyd Wright Wisconsin, Inc. The tour, dubbed Wright and Like -- Driving Mr. Wright, was held in June of 2014 and is an annual event. The 2014 tour featured two Frank Lloyd Wright homes as well as projects by other architects who are "like" Wright. Included were five homes by a relatively unknown home designer, LaVerne Lantz.
The current version of this "architectural biography" has been expanded with additional text as well as more photographs and drawings.
The mid-twentieth century saw an effusion of modern architecture. Mid-Century Modern design was in the air across America when LaVerne Lantz started to become aware of architecture. After completing a few fledgeling projects, his commissions came to him by word-of-mouth referrals. He never compromised his design philosophy; as a result, every Lantz design is a clear testament to his well-developed sense of what a house should and ought to be. Every Lantz home is a confident expression of internally consistent design principles and coherent themes. Despite the high quality and integrity of LaVerne Lantz's body of work, it is largely undocumented. This monograph serves to remedy that omission in architectural history. Any fan of Frank Lloyd Wright and aficionados of Mid-Century Modern design will appreciate LaVerne Lantz's original take on the principles of organic architecture.
Posted by Knorr at 10:23 AM 1 comment: