A Letter to the Mayor

The following letter was sent to Denver Mayor John Hickenlooper last week following presentations by the Planning department regarding proposed zoning code changes. I reproduce it here in response to interest expressed by local architects, builders, Realtors and property owners. The proposed changes follow a nationwide drift to reduce property entitlements. The trend is to make redevelopment of private property more difficult, more restrictive, and less creative. (See "Malibu Dreaming" post, March 31, 2009.) I apologize to readers outside of Denver who may find this discussion of zoning rules a bit arcane, but be aware it could happen in your neighborhood.

I do believe the final draft of the new zoning changes will be less Draconian than the current proposal. How much better is difficult to predict. To keep abreast of the massive code revisions (hundreds of pages) visit www.denvergov.org/planning. You can also find contact information for the mayor, council members, and the Planning department at this site.

I have attended several meetings and workshops conducted by the department of Community Planning and Development regarding the new zoning code. The Planning department emphasizes that the new code is “a work in progress.” Work has progressed for some time with each rendition of the proposed code introducing additional troubling concepts and details. Since the shape of the code is now becoming quite specific, I feel it is time to register deep concerns regarding negative architectural and economic impacts the new code will have.

The proposed code is lengthy and complex, covering, as it must, very different neighborhoods and conditions. The observations in this letter are limited mainly to the S-SU-B and E-SU-D designations and specifically as they apply to the University Hills neighborhood. These are limited examples. Please be aware that other parts of the proposed code are similarly flawed.

S-SU-B is a residential district. The blocks of University Hills north and east of Eisenhower Park fall under this new category. Spokespeople from Planning assert that the current R1 zoning (single family detached) would remain intact and thus “preserve current entitlements.” In fact, as written, S-SU-B would change current entitlements by significantly reducing the allowable size of future development. This will negatively impact property values and, by extension, the future tax base of the City and County of Denver.

Lots in this neighborhood vary considerably by orientation and shape. There is no typical lot, but a common size is 60’ x 155’ (approximately 9300 square feet) as illustrated below. Prior to February 2003 one could develop 50% of such a lot, including garage, porches, and any covered areas:


This entitlement allowed for several features of proven value in the marketplace: a three-car garage (albeit with a “tandem” space on this narrow lot), the option of a single-story plan, and room for outdoor covered spaces.

These possibilities significantly changed with “Quick Wins II” in 2003. Those changes, currently in effect, limited developable area to 37.5 per cent of a lot:

On the example 9300 square foot lot with similar garage and porch allowances, the main floor living area is reduced to 2300 square feet. The possibility of a single-story plan is sharply curtailed and two-story plans become more likely. Of course, smaller lots (of which there are many in the neighborhood) have less buildable area. Current zoning restrictions also sharply curtail the size of second floors, development in the rear one-third of a lot, and the bulk of structures. Nevertheless, the University Hills neighborhood has seen a renaissance of new housing in recent years under these restrictions.

The proposed zoning reduces the developable area again. The new maximum is a miserly thirty percent. In print, this is an abstract number. On actual lots the effects are Draconian:

3 Proposed zoning with 30% maximum lot coverage.
To yield 1900 square feet of living area one would be required to forgo a third garage space and reduce the amount of covered porches or patios. Single-story plans or main floor master suites become more difficult. Remember, the illustrated example is a relatively large lot by urban standards; even so we encounter difficulties meeting the demands of market-oriented housing. Imagine how problematic this becomes with smaller parcels. Big segments of the market would be jeopardized by these conditions: growing families who require more bedrooms and additional car shelter, older or physically challenged people who don’t want to climb stairs, and the affluent market that simply demands more space. 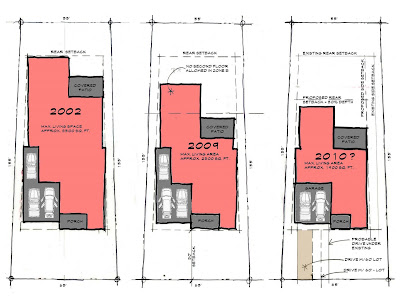 4 The Incredible Shrinking House
There are many other detrimental restrictions in the proposed zoning. Note in the above illustration how the allowable driveway shrinks to a ridiculously small area. The proposed rules would make servicing two-car garages impossible.

Also worrisome are the proposed height and setback changes. Current rules allow for a two-story house that could offer the style, amenities, and architectural volume to make it competitive in the broad marketplace. The proposed zoning drastically reduces width, overall height, and floor-to-ceiling allowances. Two story homes would lose 4’ to 9’ in height (depending on lot width). Single story homes would lose 10’ to 15’ in allowable height. Increased side yard setbacks further reduce the street presence of new construction. Houses already limited by Quick Wins II are further diminished in size and curb appeal. 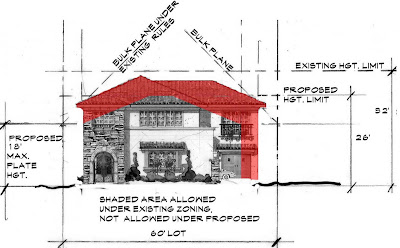 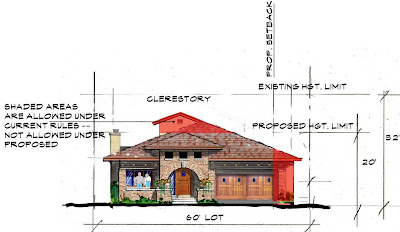 6 One story homes would fall under additional height restrictions.


The Planning department makes a point of claiming that architectural style is not affected by these changes. However, the restrictions channel design into squat structures with low-pitched roofs and low plate heights. Furthermore, even more severe limits on flat-roofed structures and single-story plans make modern or inventive styles impossible as shown in the two examples below: 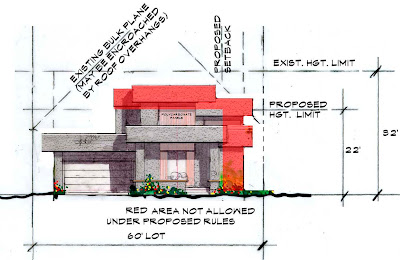 7 Flat roof structures are singled out; the red-shaded areas would not be permitted.

8 Innovative architecture is problematic under the proposed limits; shaded areas not allowed.

A second University Hills district, described as “urban edge”, falls to the south of Eisenhower Park. This E-SU-D designation is distinguished by square blocks with alleys. Otherwise, it is similar to the rest of University Hills in appearance and variety. Yet some of the restrictions here are even more severe. Rear setbacks are now proposed at 50% to 60% of the lot depth and allowable driveway features (such as circular drives) are mathematically eliminated. If the intent is to preserve the morphology of the neighborhood, the restrictions do not accomplish this. For example, an actual existing older home of 1500 square feet would be impossible to reproduce under the proposed rules. Square footage, width, and architectural offsets would all be in violation. Approximately 200 square feet would be lost in the following example:

9 An older existing home not allowed under the new rules.
Calibration

The response by Planning to these criticisms in public meetings has been that the restrictions are in flux and will be “calibrated” based on neighborhood input. My concerns are more fundamental than calibrating numbers. A catch phrase from Planning describes the zoning revisions as “form based” design. This means, by my understanding, that for every designated district the shape, size, offsets, and massing are predetermined by a matrix of dimensions. At the same time, we are told that these prescriptions do not regulate architectural style. The contradiction in the last two sentences should be apparent. Architectural style is not limited to frivolous details applied to predetermined shapes. Architecture is precisely a result of form.

This letter has focused on a limited portion of a lengthy document. I want to emphasize, again, that there are numerous examples throughout the proposed code where architecture and development possibilities are limited more like a covenant-controlled community than a vibrant urban center. Section 3.3.2, to cite one final example, gets into issues of architectural “articulation.” It describes (in detail) “horizontal articulation elements,” the “base, middle, cap” of a building, and even the dimensions of eave projections. There are whole swaths of architectural styles compromised by such picayune micromanagement.

The proposed zoning moves in the direction of freeze-drying our neighborhoods, as if they are already the best that they can be. This only stifles new ideas and discourages monetary investment. It will put Denver at a competitive disadvantage for tax dollars. It will limit the number and diversity of people attracted to our redeveloping neighborhoods. Most detrimental to current residents is the damper it places on existing lots and the possibilities of enjoying the full potential of our property.

As an architect, I would like to see every aspect of the built environment in perfect harmony, well proportioned and beautiful. But this works best when it happens organically and with variety. By allowing great latitude in the system, mistakes may happen and things may not always look the way we want them to. However, in balance, maximizing creative freedom also invites exciting innovations that just may point the way to a better life for everybody.

The proposed zoning code heads in the wrong direction. I trust that the mayor’s office will closely examine these impending policy changes. If you or a member of your staff would like to discuss these ideas or other aspects of the code in more detail I am available anytime.