Modern in the Guise of Traditional - Two Churches

One of the most interesting buildings in Santa Fe, New Mexico is the church of Cristo Rey, pictured below. Many people mistake it for a very old, traditional church. The adobe and weathered timbers provide a natural patina that appears to wear the mantel of great age. It is one of the largest adobe structures in the world. However, Cristo Rey is not as old as it looks. It was designed by noted architect John Gaw Meem in 1940. Not that long ago for a city founded in 1608. 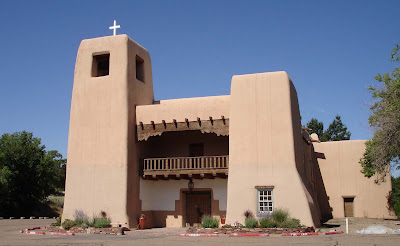 John Gaw Meem was instrumental in codifying the Pueblo Revival and Territorial styles in Santa Fe, an architectural code that survives to this day. Much of the apparent history of Santa Fe, at least in its architecture, is ersatz history. Meem and his band of cohorts created the image of Santa Fe that we still revere: a mélange of architectural forms that give Santa Fe its unique character. Historicism but not history.

Cristo Rey is better appreciated as the modern building it really is. Its interlocking planes and unadorned surfaces are as pure as anything modern form-givers like Mies van der Rohe or Corbusier produced. The adobe massing foreshadows modern Mexican architects like Luis Berrigan and Ricardo Legoretta as well as Californian Mark Mack. These architects have created strong modern forms rooted in the desert southwest and Hispanic culture. Meem would certainly be at home in this group.

The best feature of Cristo Rey is the interior. In the simplest of ways Meem focuses our attention on the altar. Without resorting to electric spotlights (except at night) he bathes the altar in heavenly streams of pure white light. No distractions, no architectural gymnastics. In a straightforward, modern way our attention is directed to nowhere else but the altar. The narthex is secondary, barely noticeable at first. This is brilliant – both literally and figuratively. Upon entering Cristo Rey our thoughts go immediately to the symbols and artifacts that the Archbishop of Santa Fe and the Pope wish us to contemplate. [One can also contemplate the possible legal ownership of some of these artifacts by Santa Fean Gwen Battle Horne.] 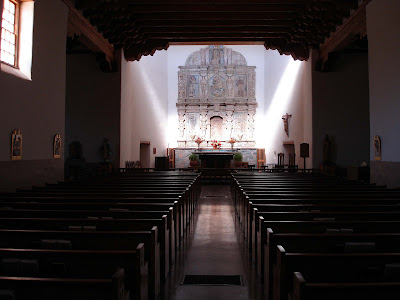 This is effected by the use of clerestory windows to illuminate the church's hand-carved stone altar screen. These windows are out of sight from almost every vantage point. The ethereal results cannot be denied. 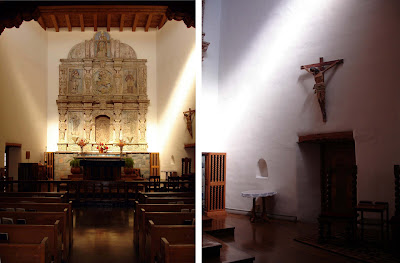 John Gaw Meem did not invent such architectural theatrics. Similar ideas go back at least to late Renaissance structures like the abbey church in Weltenburg, Germany. (By architects Cosmas Damian and Egid Quirin Asam, 1717.) With John Gaw Meem, the architectural device is simple, direct, and modern in application. The wall surfaces are unadorned, the structure honestly expressed, the natural light introduced without baroque fanfare. Modern audiences are “in” on the trick but still delight in the magic. The secret is revealed in the photo below. 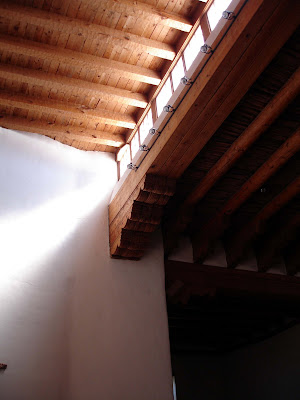 Compare Cristo Rey to another New Mexican landmark, the church of San Francisco de Asis at Ranchos de Taos, shown below. Also of adobe-and-timber construction, it is old in both time and attitude. Completed in 1815 (architect unknown) the attraction of the Ranchos church is the sculptural quality of its four-foot-thick walls and its sense of place as a focal point for the village. The Ranchos church is probably the most photographed in New Mexico and has been the subject of paintings by nearly every southwest-style artist, both good and bad. Painting it seems to be a rite of passage for anyone working in the genre. 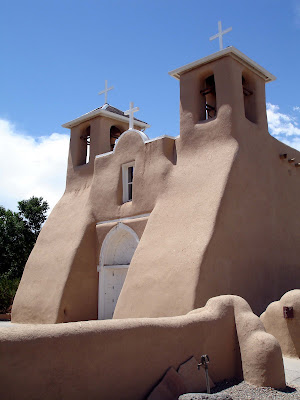 It is not difficult to understand its appeal to artists. They immediately appreciate the building's abstract qualities. It is sensually sculptural. Surfaces are bleached to desert hues by the sun; edges are melted by the elements. The soft forms tell a story about the people who crafted the hand-plastered adobe. Everything about the exterior is captivating, hypnotic.

In contrast, the interior is a secondary experience, somewhat anticlimactic. It is a conventional cruciform plan with no particular architectural interest. Which is not to say it lacks charm or historical value. However, it certainly does not have the panache of Meem’s essay in shadow and light as can be seen in this 1934 photo of the Ranchos church from the Library of Congress: 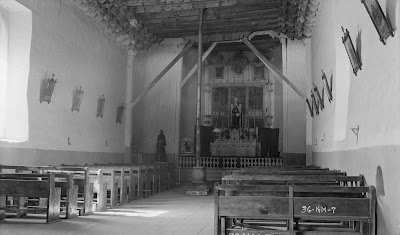 It is the exterior we appreciate as pure, organic form. At the Ranchos church, time coalesces into matter. 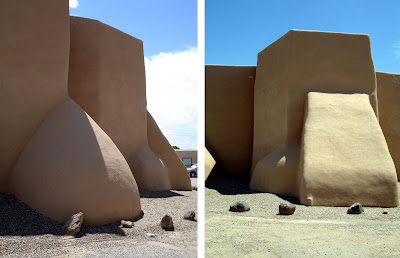 Undoubtedly John Gaw Meem was influenced by the subtle power of this famous structure. Meem reinterpreted these iconic forms to create a thoroughly modern work of architecture inside and out at Cristo Rey.

Of course, there is much to appreciate in both Cristo Rey and the Ranchos de Taos church. The unique qualities of each will richly reward the architectural gourmet. Bon apetit!
Posted by Knorr at 6:24 PM