There is a shopping center near my house that is nice enough, as shopping centers go. It has a quasi-prairie style demeanor with hip roofs and broad overhangs. It supports a useful assortment of shops: Pier One, Petsmart, a couple of banks, and the obligatory Starbucks.
The architecture softens a big box venue, Office Max, as well as can be done. But every time I visit the center I'm disappointed by a potentially good design that has dropped the ball. The hip roof motif looks great from certain angles (head on) but from other vantage points the hip roofs are severed like useless appendages. Worse: when viewed from the rear, the hips turn into aluminum-paneled gables. 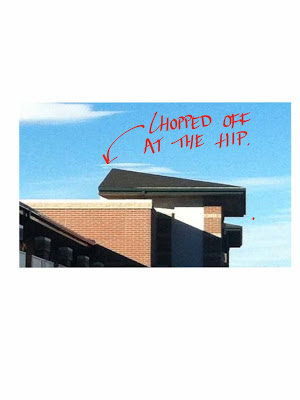 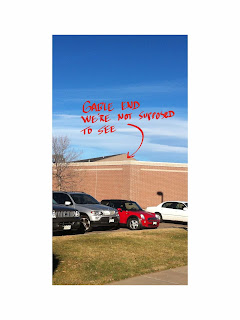 Some people view things as a cup half full and others as a cup half empty. Either way, these chopped-off hip roofs are half-a-cup of architecture. They are incomplete; fake; deceptive. Obviously, these phantom roofs are a way to simplify (cheapen) the design. The architects probably thought we would never notice. They appear to have succumbed to a common pitfall amongst architects and developers: designing a building from the front, forgetting that we live in a three-dimensional world. This shopping center sprawls over three city blocks, surrounded on four sides by busy streets. It is impossible not to see the architecture from all sides.
We are constantly exposed to this type of facade-ism: buildings designed like storefronts in a western movie. A Flatland world where a building is imagined to exist only in one dimension. Then we turn the corner and realize half of it is fake. A pretentious facade designed to make us think the building is more important than it really is.

We are inundated with this attitude in residential architecture. Many houses are built with brick facades facing the street and cheaper materials around the sides. This is so common we don't think much about it anymore. It has almost become a style in itself. Maligned by thinking architects over the years,  facade-ism is sometimes addressed (somewhat defensively) by taking a wee bit of brick around the corner (see, we really are three-dimensional) but then suddenly quitting the more expensive material for something cheaper. This strategy can work only if the expensive material ends in a graceful way, such as at a jog in the building or by completing a column. All too often it is an empty gesture that only emphasizes the haplessness of the architect and/or the developer. Better to leave the brick off altogether than expose the vacuity of style in a half-hearted attempt at three-dimensional thinking.

Kinda makes you thirsty for a full cup of architecture. 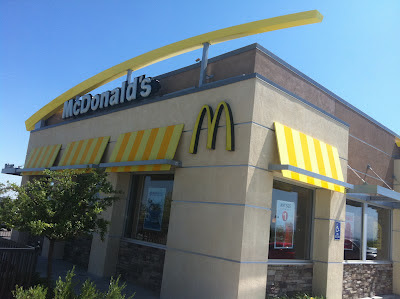 Have you noticed that McDonalds has been upping its image lately with newly-mod architecture?
The kitsch of yore is gone, replaced with Starbuckian elevations and furnishings. I don't quite know what to make of it. Seeing a stylish McDonalds is like meeting a monkey in a tuxedo. Will I have a more rewarding experience just because the packaging has improved?

Of course, McDonalds was never not modern. It's just that now it has moved from naive and corny to aspiring sophistication (of a sort). 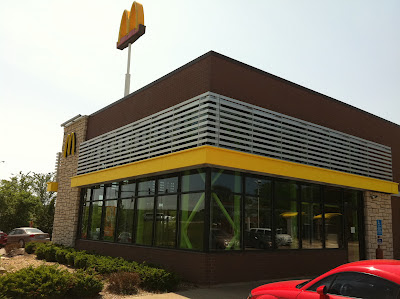 Here's the dilemma: I am always an advocate of better design in any context, but when good design filters down to McDonalds is it trivialized?  Have the semi-curved roof shapes and organic interiors favored by so many contemporary architects become so common that McDonalds - the lowest common denominator of pop culture - can use them with impunity? 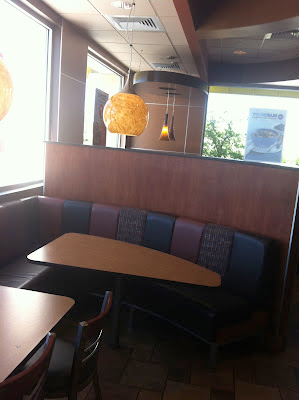 McDonalds is still the same old McDonalds, trying to disguise itself as something better. Plus ce change, plus ce le meme chose. I am still looking for the "McCafe" I see in their ads: cool people drinking customized coffee drinks to the soothing saxaphone of a jazz musician. It doesn't exist, and I'm frustrated every time I search for it.

When you travel across the country every McDonalds menu is still predictable. The restrooms have the same fixtures, the order counter never changes, the ketchup bars are identical. Of course, the food is unvarying. We will never be disappointed at a McDonalds because it always delivers exactly what we expect it to. And now we are gently being offered the same repetitive mod look across the country and we are not offended. It is the pink slime of architecture: a processed filler that keeps us in a numb state of acceptance. None of this new design imagery at McDonalds is in any way challenging or inventive. It lacks the most important quality of good architecture: spatial experience. The new McDonalds architecture is surface treatment with no substance. Just like the food.