Giving Architectural Credit Where Due 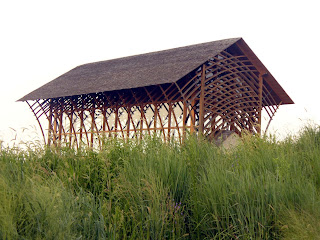 One of my pet peeves is seeing mention of a work of architecture without acknowledging the architect. To me, that is like a book review without credit to the author. It would never happen with books, but it happens all the time with architecture. To my chagrin, it happened with one of my own architectural reviews.

On April 15, 2009 I blogged about the beautiful Holy Family Shrine in Gretna, Nebraska: A Religious Experince on I-80. I had found a reference in the visitor center to Fay Jones and credited him as the architect. Fay Jones consistently produced wonderful work during his career, including several ecclesiastical buildings in a similar vein.

Last month I received several comments from readers, including Ellen Compton, archivist for the Fay Jones Collection at the University of Arkansas. Apparently, the Holy Family Shrine is not the work of Fay Jones. In fact, the web site for architects Beringer Ciaccio Dennell Mabrey in Omaha prominently displays the chapel as an example of their work. What was going on here? Was I hallucinating that I had seen Jones mentioned in the visitor center? How could I have been that far off base? I decided to write the builiding’s overseer, Father Matthew Gutowski of the Omaha Archdiocese, with my questions. Father Gutowski was kind enough to respond immediately, clearing up the mystery and adding insight to the evolution of Holy Family Shrine. I would like to set the record straight by reprinting his letter:

Thank you for your compliments about the Holy Family Shrine.

No, you are not hallucinating. There is a reference to Faye Jones on the story boards in the visitor center. Anne Louise Miceck, one of the persons involved in developing the Shrine, had seen his Cooper Memorial Chapel in Arkansas and desired to build something like it. And Jim Dennel, one of the partners of BCDM Architects, who is the architect for the Shrine, is an admirer of the Jones’ chapels so he was pleased to be one of the persons who was involved in the developing of the Shrine by designing it and managing its construction. And before I went to the seminary to study to be a priest, I was studying architecture at the University of Nebraska-Lincoln, and also admired Jones’s chapels. So, the three of us were the original trio that the Lord brought together as the founders of the Shrine, who unbeknownst, until we met at Christ the King Parish in Omaha when I was assigned there in the early 1990s, had all individually had some type of admiration for Jones’ work and the desire to build a chapel.

Hope that answers your question. Let me know if you have any more. I looked at your website and blog: very nice! 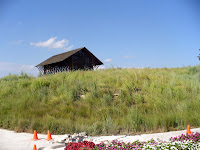 I reread my entry from April and stand by my opinion: the Holy Family Shrine is a great experience in light, sound, touch, and a sense of spiritual engagement. It sure looks like a Jones building, but I am pleased to acknowledge BCDM Architects and give them credit for beautiful results.
Photos:
Michael Knorr
Posted by Knorr at 1:35 PM