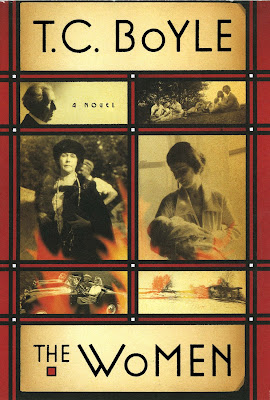 The Women reads like the plot of a soap opera. But, then, that is pretty much the way any biography of Frank Lloyd Wright reads. He led such a (deliberately?) dramatic life that any recounting elicits incredulity. Since so many biographers consistently report the same facts, we can conclude that the famous architect did indeed lead a life of over-scaled events, despite the fact that his architectural work stresses human-scaled spaces. He imbued his architecture with tranquility; meanwhile his personal life was a whirl of chaos and tension. My favorite biographical recounting is Finis Farr’s 1961 work, published just two years after Wright’s passing. I read that when I was very young so it may have left more of an impression than it deserves. A more recent (and more lascivious) version of Wright’s scandalous life is The Fellowship: The Untold Story of Frank Lloyd Wright and the Taliesin Fellowship by Roger Friedland and Harold Zellman (2007). A factual potboiler and a fascinating read. 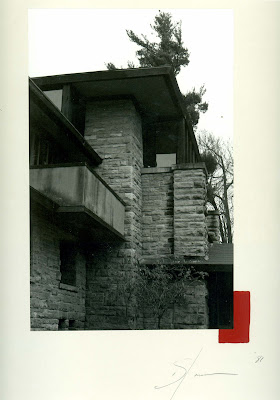 A favorite photo of Wright’s Taliesin given to me by Molly Lantz.
Possibly by photographer/inventor Ed Farber (1981).

Back to The Women. Boyle bases his book on well-documented events making his work very nearly a straight biography rather than a novelized tale. However, conversations, emotions, and motivations are necessarily conjecture, forcing it into the novel category. The reader can, however, take the bones of the story as historical record. The sordid facts are all true, documented in newspapers and magazines of the day and recounted by many people who knew Wright and lived through the events with him.

The literary device that makes The Women interesting is presenting the story backwards. Boyle reveals events in reverse chronological order, covering, in turn, the four most important women in Wright’s life. The author starts with his last wife, Oligivanna Milanoff, the daughter of a Montenegrin Supreme Court justice and student of Gurdjieff. He then moves to wife number two, Miram Noel, a morphine-addled esthete. Next Boyle covers the murdered mistress and wife of a former client, Mamah Cheney. Finally we meet Catherine, the first Mrs. Wright and mother to six of his children. A fifth woman, Wright’s mother Anna, could easily have been a major player in this tale. She had a tremendous influence on his personal and professional life. Boyle chose to limit his tale to Wright’s paramours. He does not ignore Anna, but relegates her to a minor role.

The reverse trajectory of the story makes a good tale because events that seem inexplicable or improbable when first exposed gradually make sense as the history behind them is revealed. Like real life, things that first seem bizarre often make sense when all the facts are discovered. Why is Miram Noel so erratic and vengeful? The behavior is explained by her spoiled life and troubled relationship to drugs, as we learn many pages later. How did Wright’s home, Taliesin, become a sophisticated expression of his unique style? It evolved as he rebuilt the place several times for reasons that are integral to his life story; each version of Taliesin became more refined and a clearer expression of Wright’s architectural principles.

All of this is luridly entertaining. The characters are crazy and exotic though Wright ultimately comes off as an arrogant egotist. (A term more pejorative than egoist, as pointed out by Ayn Rand many years ago when she was mislead by a dictionary. (!) A topic for another day.) Peripheral characters include celebrities, disciples, newspaper reporters, and local rubes. Wright never hesitates to turn all of them to his egotistical advantage. He allows spectacular personal events to orbit around him, apparently craving attention in order to amplify his larger-than-life persona. Few biographers would dispute the evidence of this. Many who knew him remarked on the uncomfortable opposition of his life to his life’s work. His buildings are friendly invitations to comfort and ease. His personality was self-exalted over the talents, needs, and considerations of others. An oft-quoted testament of Wright’s is that he preferred “honest arrogance” to “hypocritical humility.” It’s hard to argue with that amusing quip, except as it tends to excuse outrageously inconsiderate behavior. 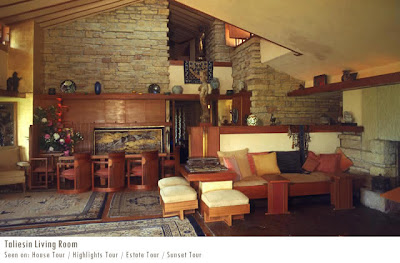 The warm interior of Taliesin. (From Taliesin web site.)

But this blog is less interested in Wright’s personality than his architecture. We really have to come to The Women with some knowledge of Wright’s accomplishments as an innovator and form giver or we wouldn’t be interested in his biography in the first place. In truth, he stands alone as the titan of twentieth century American architecture. He is not the only great architect this country has produced, of course. But his achievements came first in so many categories that he has to be placed at the top of the list. European-Americans contributed significant works to modern architecture. Mies van der Rohe and Richard Neutra cannot be ignored, but they freely admitted the early influence Wright had on their work even before emigrating to the United States. Locally grown architects, such as John Lautner and Bruce Goff, also made significant contributions, but they came later in the century after Wright had already staked his territory in the modern world. They also acknowledged the influence Wright had on their work. 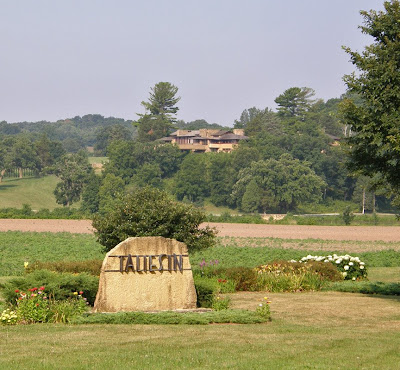 Taliesin emerges from its Wisconsin hillside. (From Taliesin web site.)

Unfortunately, The Women contains only hints of Wright’s architectural achievements. Descriptions of his buildings are sparse. That’s unfortunate since Boyle does have a gift for descriptive phrase. At one point he compares Taliesin (Wright’s rural Wisconsin home) to a Druid castle, its stone battlements anchoring it to the native hills. Most critics see the Japanese influence on Taliesin. The Druid analogy is unique, but I saw it in that light three years ago. I was driving down State Road 23 in Wisconsin on a drizzly spring day. Rounding a corner on the lonely road, Taliesin emerged from the misty hillside like an extension of the sandstone rock outcroppings in the region. It was Brigadoon… not quite real.

“The house was beautiful… “ Miram Noel muses in The Women. “There was an aura of peace about the place… the simple transparent beauty of the place had a calming effect beyond all thought…”

Taliesin is as much a character as any of the women in The Women. Taliesin was Wright’s true love as well as the vortex of his story. Fires, multiple murders, legal theatrics, tabloid exploitations. All of this swirled around and through Taliesin. 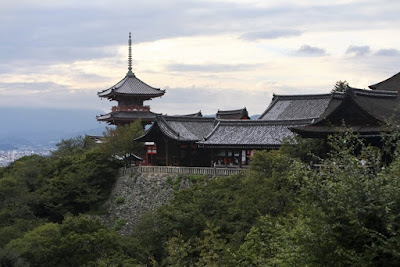 Taliesin is often compared to the architecture of rural Japan.

Read The Women as an enjoyable summer novel. Read elsewhere for a serious understanding of Wright’s architectural work.
Posted by Knorr at 1:34 PM No comments: