Everybody likes to make lists of their favorite things. Movies. Books. Places. Presenting a list of great architecture is an excuse to mention the principles and innovations behind these works. Other, equally qualified, choices could be made, but this is my personal list of the top ten all-time best works of architecture. If you have different candidates or you think I missed something important, let me know. Presented in ascending order… 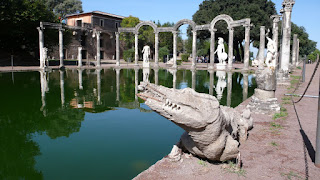 10. Hadrian’s Villa
Architect unknown. Tivoli, Italy. c.120.
This is the oldest structure on the list. I could just as readily have chosen from other groups of ancient residences; Pompeii and Ephesus have more complete examples of Roman homes. Hadrian’s Villa is simply the best-known (and largest) residence of antiquity. I include it here as representative of all ancient Mediterranean villas. As a genre, these homes, right down to those of middle-class merchants, demonstrate that we have much to learn and remember about gracious living. 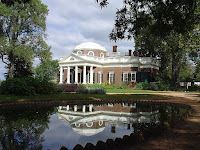 9. Monticello
Thomas Jefferson, architect. Charlottesville, Virginia. 1769-1809.
The outward shell of Monticello is classical Palladian architecture. That is merely a cloak for Jefferson’s clever spaces. But, in the end, nothing here is either classical or Palladian. This is pure American inventiveness.
8. St. Peter’s Basilica

Architects: Bramante, Michelangelo, Moderno, et al. Vatican City. 1506-1626.
At least one great work of architecture must be included to represent the sixteenth century, so why not the biggest? The Renaissance was one of the most inventive periods for architecture. St. Peter’s embodies (and may be the culmination of) the Renaissance conception of voluminous and voluptuous space.

Pierre de Montreuil,architect. Paris, France. 1248. (Restored 1855 by Viollet-le-Duc.)
Sainte-Chapelle is not the largest of Gothic cathedrals. In fact, it is simply a small chapel built by Loux IX to shelter sacred relics. But it is a perfect example of the struggle of thirteenth-century architects to completely dissolve structure and create space out of light.

6. Wayfarers Chapel
Lloyd Wright, architect. Rancho Palos Verdes, California. 1949.
At first glance, this glass chapel, designed by Frank Lloyd Wright’s son, may seem like a modern version of Sainte-Chapelle. In fact, a quite different principle is at work here. Instead of enclosing space with stained glass windows, space is extended by blurring the distinction between indoors and outdoors. Here the walls are trees and the ceiling is sky. 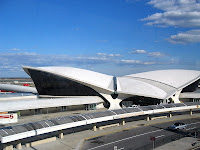 Eero Saarinen, architect. Kennedy Airport, New York City. 1956-1962.
This building falls into a category of expressionist architecture some find willful and strange. But Saarinen’s work, unlike the freewheeling architecture currently in vogue, is never arbitrary or aimless. All of this lush creativity without the aid of computers! 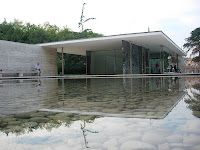 Mies van der Rohe, architect. Barcelona, Spain. 1929.
Built as the German Pavilion for the 1929 International Exposition in Barcelona, this is generally referred to as the Barcelona Pavilion. With no real function to weigh it down, it synthesizes every revolutionary idea of twentieth century architecture in one succinct opus. An open plan, honest use of materials, indoor/outdoor connections, cantilevered roof, disdain for decoration. All of these truly modern ideas are presented here in elegant simplicity. 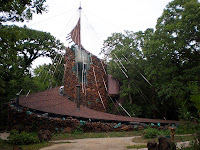 Bruce Goff, architect. Norman, Oklahoma. 1951.
No photographs can properly explain Bruce Goff’s inventions, particularly the Bavinger house. This is because his frequent use of non-orthogonal lines has no reference in everyday experience. When we see a picture of a “normal” building (rectangular, with parallel walls and ceilings) we can compare it to the square buildings in our daily life and construct an image of it in our minds. Not so with Goff’s architecture. Goff built houses as if no house ever existed before. His works are pure architecture and must be felt in person to be understood. (Of course, that’s true of all architecture, isn’t it?) 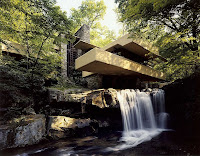 Frank Lloyd Wright, architect. Bear Run, Pennsylvania. 1939.
Built as a weekend retreat in the woods, no twentieth century architecture is more romantic. An answer and a challenge to the more severe approaches of Wright’s contemporary competitors and the so-called international style, Fallingwater is both primal and modern. It not so much on the earth as of it. Defying gravity as it balances atop its waterfall, Fallingwater is beautiful, dangerous, complex. With this building Frank Lloyd Wright confidently reinvented architecture and his prairie-school self. 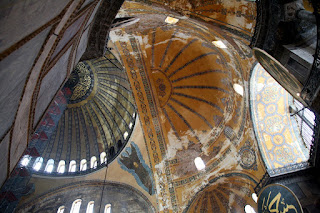 Isidore of Miletus and Anthemius of Tralles, architects. Istanbul, Turkey. 537.
Hagia Sophia was, for a millennium, the largest cathedral the world had ever seen. But it is not just brute size that makes Hagia Sophia significant. (If that were the reason, the Astrodome would be great architecture. It is not.) The massive walls and buttresses of Hagia Sophia support half-domes and galleries that all but explode into a huge, soaring dome that floats magically on a continuous ring of arched openings. A hundred mosques in Istanbul mimic Hagia Sophia, but it was first.


Many important structures did not make this list. For example, there is not a single skyscraper here; no Empire State Building, no Chrysler Building, no Rockefeller Center. This is because most tall buildings are weak on interior volume. While the Chrysler Building, one of my favorites, is a stunning New York landmark, each individual floor is just conventional office space. The lobby, while an elegant example of art deco design, is not particularly noteworthy in the history of architecture.
Then there are structures like the pyramids, which are architectonic in scale, but enclose no architectural spaces. Call them monuments or sculpture, but don’t call them architecture.
Other built things like the Eiffel Tower or Brooklyn Bridge are wonderful examples of engineering, but are not, by my definition, architecture.
Finally, there are individual architects who should probably have at least one work on my list, but do not. Palladio, Brunileschi, Gaudi, Neutra, Corbusier, Lautner, Calatrava are all missing. Every one of them has contributed important works to the world of architecture, but, in the end, I had to narrow things down to just ten. Probably not fair, but there you are.
Let me know your favorite works of architecture (and why) via the “comments” link below.
Credits:
10. Rob Munger
9. Matt Kozlowski
8. Panini
7. Didier B
6. Gyrofrog
5.pheezy
4. Russ McGinn
3. Jones
2. Figuura
1. Rob Munger
Posted by Knorr at 10:57 AM 5 comments: