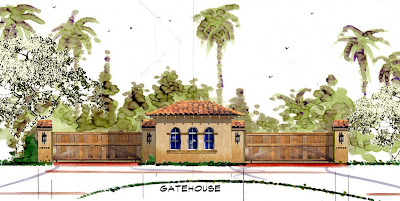 It is always a pleasure to work on projects in southern California, especially during the winter when Denver’s vegetation turns brown. It’s a sensuous reward to arrive at LAX and take the short drive to Malibu through balmy temperatures, colorful flowers, and rustling palms. That’s the route to our current California project: two homes on the Pacific Coast Highway.

Michael Knorr & Associates has been working for a over a year on this project. It has taken this long (and we’re not through yet!) due to the notorious difficulty of getting things done in coastal communities. Particularly Malibu. The number of consultants, submittals, agencies, reports, reviews, and inconsistencies is astonishing. Without getting into those details, let’s just say we were warned. These two homes have been great fun to design and I want to share some previews of them here. The design intent was to capture the charm and grace of old California ranchos. A nearby local landmark, the Adamson house on Malibu beach, provided some of the inspiration

We won’t mention the developers or the exact location until the approval process is further along. But I do want cite our local collaborating architect Winston Chappell, based in Santa Monica, for his talented and genial contributions.