There is a word rarely used in architecture, but descriptive of a strong design principal: enfilade. In military parlance, enfilade is a familiar term. It means gunfire directed from a flanking position along the length of an enemy battle line. The architectural definition has nothing to do with battle. However, there is a conceptual relationship with the military application. Both derive from the French enfiler, "to string together as in series or row." Enfilade, in architecture, is an interconnected group of rooms arranged in a row with each room opening to the next. Simply put, enfilade means spaces arranged in sequence along an axis. This implies symmetry but that is not the salient feature of enfilade. It is better understood as a sequential revelation of architectural features that stirs our curiosity and forces our movement forward. It is an ancient and compelling design tool. 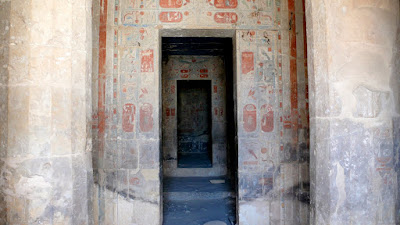 Enfilade is a powerful military tactic; it is also surprisingly powerful in architecture. Enfilade is a way to focus attention and influence emotion in architecture. Typically this is a subconscious effect; we seldom are consciously aware of the architectural elements that are forcing our attention in one direction or another. Nevertheless, the effect is real and irresistible. A few examples demonstrate its meaning and power.

Consider the spatial organization of great cathedrals. The typical plan progresses from narthex, to nave to high altar. The spaces build to an architectural crescendo. 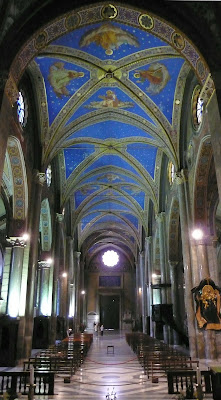 A crescendo — a focal point — is an important element of architecture and deserves its own discussion. Enfilade is not the crescendo itself, but the means of getting to it. This arrangement of spaces along an axis is like telling a good story: simple statements engage our interest, then proceed to more complex and engaging concepts until our intellect, emotions, and curiosity are satisfied and rewarded. In Roman Catholic cathedrals a story is often told literally with the stations of the cross distributed off the main axis. The architecture reinforces the literal story and propels it forward as well as providing an emotional subtext.

A spectacular example of enfilade is the Forbidden City in Beijing. 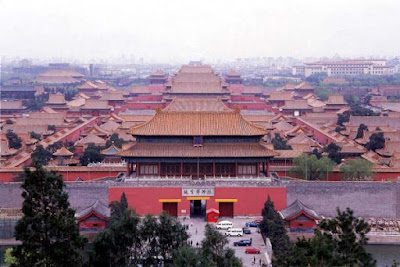 This enormous complex of courtyards, temples, and palaces is brilliantly analyzed by Edmund N. Bacon’s in his book Design of Cities. Bacon, through a series of diagrams and plans, deftly explains the richness and grandeur of this classic arrangement of spaces. The Forbidden City is one of the worlds great examples of enfilade on a monumental scale and Bacon's book is worth the time of anyone interested in architecture and urban planning.

We can also look to Egyptian temple and funerary architecture for examples of enfilade. In classic Egyptian architecture, courts, halls, and colonnades are arranged in mysterious and awe-inducing sequences. Banister Fletcher’s A History of Architecture on the Comparative Method is an excellent reference for this building type. 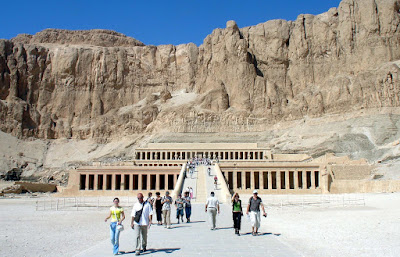 Queen Hatshepsut’s (1508-1458 B.C.E.) mortuary temple, designed by Senemut on the banks of the river Nile, is one of the most influential works of architecture in ancient Egypt. The complex is approached through a relentlessly symmetrical sequence of events that reveal, in turn, colonnades, courtyards, terraced gardens, and sacred devotional chambers. It is exactly the same processional ritual that modern-day tourists experience, as pictured above. Imagine the original grandeur emphasized with rows of towering palms, colorful pennants, and flanks of ceremonial guards. All of this would have contributed to enfilade.

We can also see enfilade on a residential scale. The process of approaching, entering, and walking through a home can use the concept as a series of planned events. The floor plan and photos below (a residence in Rancho Santa Fe, California, by Michael Knorr & Associates) illustrate a sucession of controlled spaces experienced by the visitor in deliberate order. 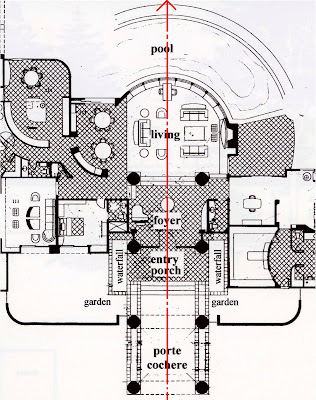 The sequence of events begins with a sheltered porte cochere, moves past glimpses of walled gardens, onto an entry porch, through a foyer, on to the living room, a crescent-shaped swimming pool and, finally, culminates in a spectacular view of hills and ocean in the distance. 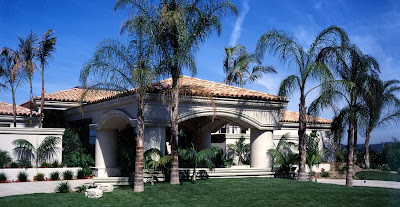 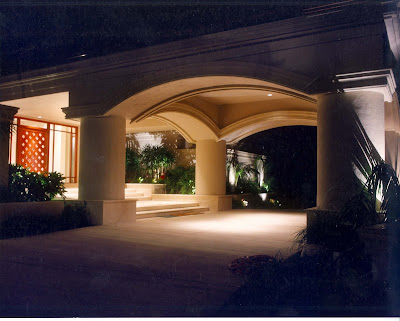 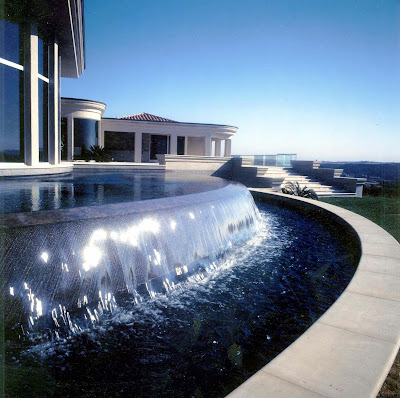 Notice how the first few spaces are defined and contained by massive (3’ diameter) columns. The space alternately “expands” and “contracts” until the route gradually releases into a wider volume at the living room and reveals the full expanse of distant vista. We are rewarded for our efforts as we progress forward. This progression is an unfolding story that provides interesting incidents along the way. (Note, for example, the water features to the left and right of the entry porch.) In the end our attention is focused and rewarded.

Enfilade is one of the great three-dimensional experiences that architecture can provide and one of the most useful tools in an architect’s bag of tricks.

Photo Credits: Forbidden City from Microsoft Office Clipart. All others by Rob Munger.