Articulation in speech means speaking clearly in order to be understood and convey meaning. In architecture, articulation means to delineate spaces so different functions are clear and architecture is meaningful. 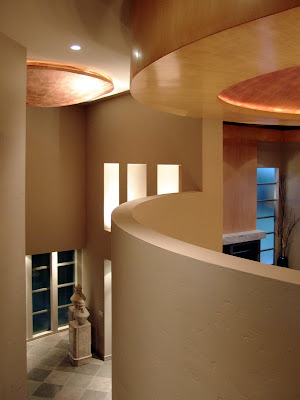 In the first half of the twentieth century there was a revolution in architecture: modernists versus traditionalists. For the most part, the modernists won. We are accustomed to radical new forms in architecture. Much of this was driven by new construction techniques, such as steel framing and reinforced concrete. Metals and glass could be mass-produced and made cheap. New theories in the visual arts, literature, and music supported modern architectural ideas. The biggest legacy of the modern revolution is the concept of open planning. Almost every home, office, or public building uses open planning in the arrangement of space. An everyday example is the way kitchens blend into family rooms in most new homes. We do not divide the spaces with walls. Inside our homes, shops, and offices the victory of modern architecture is undisputed. Interior spaces are more open than ever. If traditional styles are used at all, they are limited to exterior shells and decoration.

Before the modern revolution, interior spaces were a series of boxed-off rooms, each function neatly wrapped in its own cocoon. That does not suit today’s lifestyles. We are more casual and demand more flexibility in the use of space. In a sense, we are all modernists whether we admit it or not.

Open plans offer greater freedom for architects. However, with freedom comes responsibility and sometimes it is shirked. Designers and architects seem at a loss, at times, making wide open spaces warm, inviting, and - perhaps most important - meaningful. Freedom in space planning has yielded plans that seem, ironically, unplanned. We all have experienced these types of spaces but usually walk through them without analyzing them. That is one thing about architecture: we rarely know why a space feels wrong. Perhaps we experience a sense of unease or discomfort. Things are not right, but we do not quite know why. Often this feeling comes from the space itself. (Sometimes we just have indigestion.)

When a space lacks articulation, it can be uncomfortable or even chaotic. When one space blends indiscriminately into another, when you don’t know where one function ends and another begins, the plan lacks articulation. Even the furniture can look out of place when there are no architectural clues to guide us in the use of space. Notice how, in the illustration below, one area sloshes into another. You don’t know where the living area stops and the dining area starts. The foyer falls gracelessly into a corner without much thought. The entire space is unarticulated. 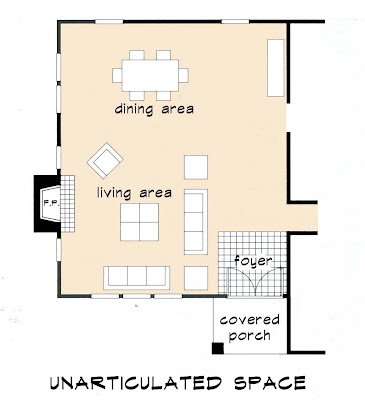 On the other hand, articulation avoids ambiguity. It simultaneously makes spaces more interesting and more functional. Architectural elements can establish articulation without making a plan confining. Columns or piers between living and dining areas, for example, can preserve openness while subtly defining functions. Overhead ledges, level changes, a jog in the plan, columns or arcades are a few of the many features that can be used to articulate space. The illustration below shows the same areas as above with exactly the same square footage. Now the space is alive with meaning while still flowing effortlessly, one function to another. It is articulated. 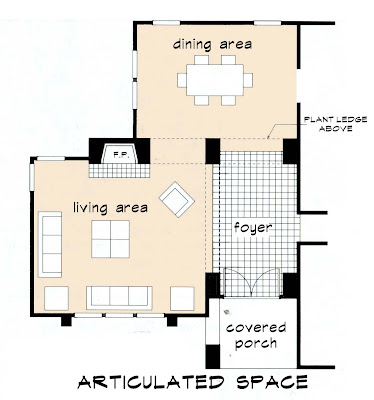 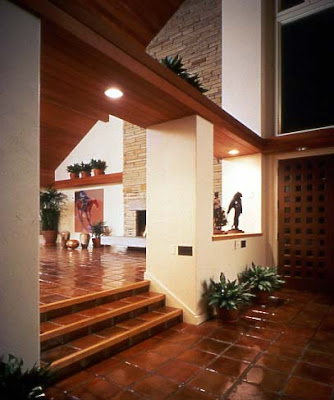 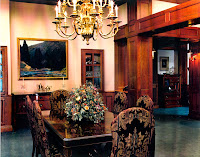 Even traditional-appearing spaces can be quite modern in spatial planning. When areas flow without doors or walls, that is a modern concept. Details may be old- world, but if the plan is open it is a modern space. How well it looks and functions is often a matter of how skillfully areas within that space are articulated.

Credits:
All examples by Michael Knorr & Assoicates
Posted by Knorr at 6:13 PM