I never intended this blog to delve into politics.  It's about architecture: the fun stuff like design, psychology, materials, and  significant architecture. Yet I find myself posting a third entry on the proposed new zoning code for the city of Denver. Zoning isn't about architecture, though it does affect architecture. It's mostly about politics, as individuals and neighborhood groups develop agendas about controlling what happens around them. Below is a letter I wrote to Councilmember Peggy Lehman with copies to the full City Council and Mayor Hickenlooper. The letter has been widely circulated and picked up by at least one neighborhood newsletter as an editorial. If you live in Denver, the new code will affect you directly. If you live elsewhere, similar issues come up on a regular basis in most cities. If you find these comments useful please feel free to reproduce them in any form.
Here is a link to the new code: http://www.newcodedenver.org/

As a resident of Council District 4 and as an architect specializing in residential design I am concerned about the final draft for the proposed zoning code for the City of Denver. It still contains numerous arbitrary and unworkable ideas that do not benefit the city.

The fourth and final draft is a rewrite of previous drafts that were laden with conceptual conflicts and impossible restrictions. Members of the design community (private planners, architects, and investors) have given freely of their time to digest the voluminous proposal and analyze its impacts. Numerous changes were made in response to these efforts. Between Draft #3 and Draft #4, approximately 50% of the text has changed. This responsiveness on the part of Community Planning and Development is commendable. However, the amount of “redlines” also indicates the depth of equivocation in the new code. Four new drafts in the last few months contained major changes at each step and scant weeks between drafts for the rest of us to “crunch the numbers” and see what it really means. There is inadequate time or opportunity to analyze and correct the current, and supposedly final, draft.

Numerous problems and ambiguities remain in Draft #4. I cite just one here: the height limits for “S” (Suburban) zones. There are many such proposed zones throughout the city. To visualize one, picture the area of University Hills north of Eisenhower Park, slated to be “S-SU-D.” As you know, these blocks contain extensive new development that has replaced small, post-war housing. A suburban district evokes images of large sprawling homes on ample lots. However, this particular “suburban” neighborhood has unusually small homes that are not up to modern code and energy expectations. These older structures are excellent starter homes and rentals, but many owners dream of improving their lot in the future. This neighborhood contains perfect candidates for upgrade or replacement because the existing stock does not meet current market needs. Older homes in this neighborhood are of no historic value. They are energy sieves and cannot compete with the amenities offered in new homes outside of Denver. It is a good thing for neighborhoods such as this to experience redevelopment because it enhances property values, adds to the city tax base, draws diversity to the urban center, and provides housing that meets the needs of families and professionals. Certainly, it is a sign of the desirability of District 4 that such development has taken place on a large scale. However, the proposed Draft #4 imposes a de facto ban on two-story homes. This would effectively quash further development in University Hills.

Two story homes are technically permitted, but if an architect were clever enough to design a house under the 27’ overall limit (dimension A, below) the best you could get is 8’ ceilings to keep within the 20’ side wall restriction (dimension B, below). Eight-foot ceilings are not what the current market expects. In actual practice, not even eight-foot ceilings would be achievable since that works only for perfectly flat lots. Most lots have less than perfect conditions (a slope or a high water table, for examples) that would skew these numbers to ridiculous results. The probable effect is that a two-story house would be impossible to build in University Hills.

The drawing below is from Draft #4. The red numbers (added by me) demonstrate that, in redeveloping neighborhoods like University Hills, new housing will be unmarketable, unlivable, or unbuildable. This would be true regardless of lot size.

To illustrate this point, the house pictured below is typical post-war construction in the blocks north of Eisenhower Park. Redevelopment of homes such as these would cease under the rules proposed in Draft #4. 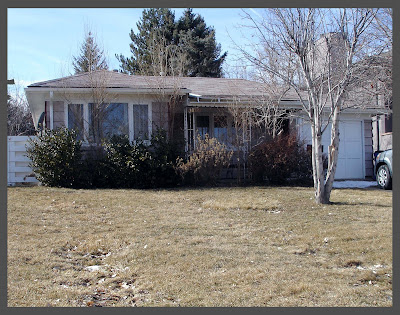 The recently developed homes below (also in the blocks north of Eisenhower Park) would be in gross non-compliance with the proposed new rules.

In parts of Draft #4, the “bulk plane” concept reappeared (after having been eliminated in earlier drafts). I believe the current bulk plane is a fair and workable concept; it should be restored to the “S” zones so neighborhoods like University Hills can continue to be renewed. As the economy recovers, we need the tax base, vibrancy, and new life that a refreshed housing market brings to Denver.

We are getting closer to a workable code but need more time to produce a final draft that addresses this and numerous other issues. I urge the Council to allow a period of review and response by the design community and all interested parties before voting on Draft #4.