Disclaimer: What follows is written as an architectural review. This should not be construed as a theological critique of the Church of Jesus Christ of Later Day Saints (The Mormons). 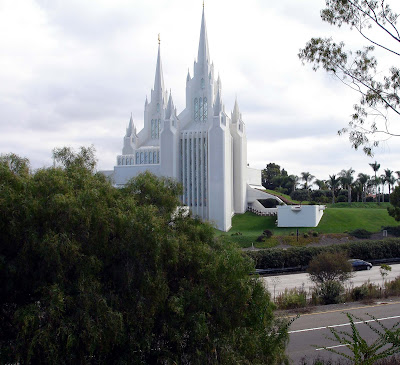 I have often driven on Interstate 5 north of San Diego to be confronted at Exit 28 with the splendiferous wonder of the San Diego Mormon Temple. No matter how many times I come upon it, I am always shocked. This white jumble of crystalline spires, full of symbology and topped with gilt sculptures glistening in the sun, is in-your-face architecture. It makes a statement. 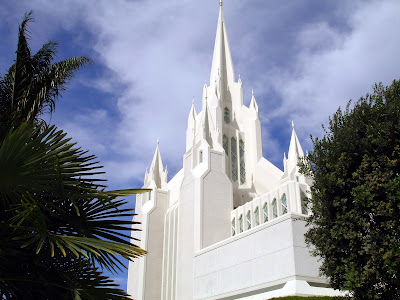 There are approximately 140 Mormon temples distributed around the world, all of them different. The San Diego Mormon Temple - a regional center for Mormon rituals and ceremonies – is not to be confused with local Mormon churches. Temples are closed to the general public; only Mormons In Good Standing are permitted entrance and only with a “recommend” from their bishop. The rituals performed inside the temple include marriages “for all eternity”, baptism of the dead, and “sealing” children to parents to permanently establish after-death families. Young people come from a wide region for these events. 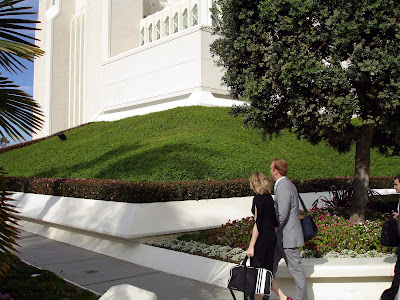 Even though I knew I would not be allowed to enter the temple, on a recent visit to San Diego I was determined to at least write a proper architectural review for a structure that has arrested my attention so often. This time, instead of ogling the building at 60 miles per hour, I exited the freeway and entered the Mormon temple grounds. 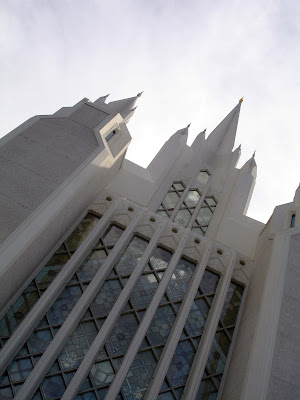 Mormons have a reputation for organization. This is evidenced immediately in the orderly landscaping. 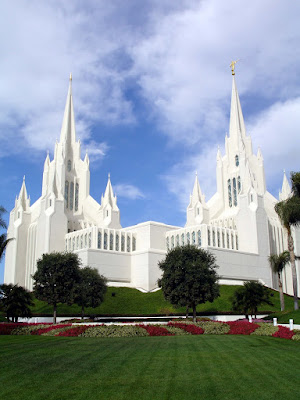 Manicured lawns and tidy flower beds frame the building in symmetrical simplicity. Parking is efficiently and discretely handled so as not to distract from the main focus. The grounds are ample but not immense. The scale of the place is difficult to gauge at freeway drivebys. Up close it appeared smaller than I had thought. It is not the Vatican, after all. The building itself, in all its whiteness, is somewhat bigger than Space Mountain but smaller than Cinderella’s castle. Not to say I was disappointed. One keeps returning to its overwhelming whitey whiteness. Even the people inside are dressed in white suits (more on that later). In comparison to dark European cathedrals this is truly an immaculate conception. The effect is achieved by mixing marble dust in plaster. This refractive surface is what makes it seem ethereal. The structure all but coalesces out of the clouds. At night it is brilliantly illuminated and the freeway impact is even more overpowering. Several times after dark I have nearly caused a gawking accident. As with Las Vegas hotels, the importance of using architecture as advertising is not lost on the Mormon church.

So, how to describe the impressive architecture of this Mormon temple? The word that keeps coming to my mind is confection. Impressive does not necessarily equate with good. The effect is greatly impressive, but the design does not qualify as great architecture in the same way that Las Vegas hotels do not qualify as great architecture. There is no real substance behind any of this. Like a giant pastry confection – say a wedding cake -- this temple is sweetness in excess, piling layer upon layer of fairytale goodness borrowed from fantastic dream images that never were. It does not emerge from any legitimate thread of architectural theory. The main confectioners, architects William S. Lewis Jr. and Kenneth Moeller, claim some sort of gothic influence (according to one Mormon web site). Other than overwrought verticality there is nothing gothic about this building. In fact, one might describe it as anti-gothic since the main tenant of gothic architecture was to liberate interior space by reducing exterior structure. In this temple the interior space is anticlimactic. You might assume from the exterior visage that this soaring temple encloses a wondrous and soaring interior, as would any gothic cathedral. In fact most of the temple is divided into small spaces like the baptistery (total immersion tank supported by twelve golden oxen), changing rooms for ceremonies (long rows of doors as in the Marx brother’s “Day at the Opera”), and other esoteric, but apparently spatially undemanding, uses. The Celestial Room at the top of the west tower is the biggest space in the building but it is nothing like we would normally expect in a large ecclesiastical edifice. What impact the Celestial Room may have is more a result of interior decoration than architecture. 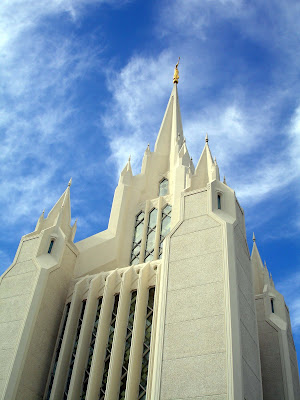 How do I know about the interior layout if non-Mormons are forbidden entry? Two sources. First, I visited the Las Vegas temple before it was sealed “for time and all eternity.” Different architect; same program. Anyone may visit a temple during a public open house before it is consecrated. Like all modern temples, the Las Vegas building is divided into small spaces for ceremony with the aforementioned Celestial Room at the top. The Celestial Room is supposed to remind you of heaven. In Las Vegas heaven is, apparently, mauve carpeting and French provincial furniture. To each their own. As Mormon canon says, “ …we dreamed each man according to the impression of his dream.” (Genesis 41:11.)

My second source is the Nice Lady in Red who was the official greeter at the San Diego temple. Sitting at the ready on a shade-dappled stone bench with a laminated picture book of temple images, she was eager to answer the questions of visitors who wanted to learn more. She allowed me to photograph her pictures of the Celestial Room and the self-supporting grand stairway that fits under one of the temple’s towers. 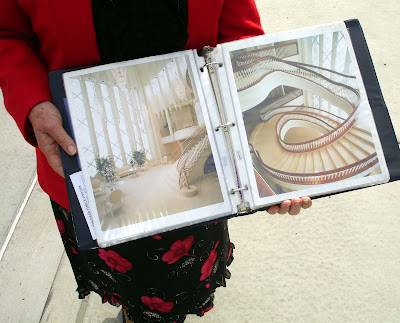 The Nice Lady in Red was quite proud of the temple interior. It is similar to the Las Vegas version. She told me that when Mormons enter the Celestial Room they are all required to dress in white. She said this further enhances the impression that one might actually be in heaven. This image sticks in one’s mind. I wonder what they do in that room, gliding around like angels? Mormons seem to be enthralled with this sort of thing. So what’s the harm? I don’t wish to demean anyone’s religious inclinations, but the architectural harm lies in confusing this treacle with real architecture. Perhaps their overreaching is a result of the Church of Jesus Christ of Later Day Saints being a newly-invented religion. They try very hard to establish their credibility by insisting on such grandiose buildings.

I fully understand that many people sincerely like this kind of building design. (I have a hard time calling it architecture.) I would ask them to look closely at their reactions. Do they really think it’s good architecture or is this just a visceral response to some pretty great special effects? We shouldn’t confuse good set design with good architecture. Truly, if the San Diego temple were painted green I would expect the Wizard of Oz inside. As for the Celestial Room, Morris Lapidus would have been proud. Morris Lapidus was an architect famous for designing over-the-top Miami Beach hotel lobbies in the 1950s. The Celestial Room rises no higher than this glam approach to interior design. I actually like it in hotels; it is suspect in a religious setting.

Such superficiality hardly seems like real architecture. The nut of the problem is, to borrow from Gertrude Stein, there is no there there. The San Diego Mormon Temple provides tantalizing suggestions that something might be going on. But with a cardboard cut-out approach to the exterior and no significant interior volume there’s not much meat and a lot of potatoes.
The Nice Lady in Red did her best to present this building in its most flattering light. I listened politely and without sarcasm. The second half of her book was about the Mormon religion. She explained how it was founded by Joseph Smith who came upon the angel Moroni in the woods near Palmyra, New York. He was led to golden tablets which he translated into the Book of Mormon using magic spectacles while hidden behind a curtain. The angel Moroni is commemorated atop one of the spires of the temple: a golden figure blowing on his trumpet. 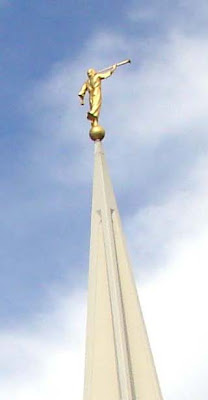 Naturally, I was moved to asked the Nice Lady in Red about Mormon doctrines, such as their past interest in polygamy and current funding of controversial political initiatives. She referred me to the Mormon missionary system, which I expect will come calling one of these days. I just hope they don’t try to convince me that there is any substance to their buildings. 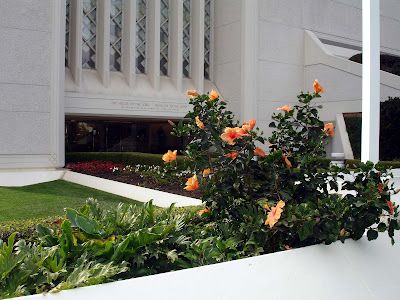 Finally, I have a confession: when the Nice Lady in Red was preoccupied with another visitor I approached the main entrance. Yes, I set foot inside the sliding doors. Maybe the lobby isn’t actually forbidden. I don’t know. There were two guys dressed in white (just like the Nice Lady in Red said there would be), one looking exactly like Colonel Sanders. They didn't look too alarmed at my presence. I wanted to ask them more questions, because I had plenty. But they were busy with Mormons In Good Standing awaiting access to the elevators that flanked the reception desk. I suppose the elevators went up to the Celestial Room. I left, satisfied that I had seen enough.

As a footnote, I have a question: if only Mormons In Good Standing may enter the temple, what happens when non-Mormon fire marshals need to make an inspection? I’ve always been curious about this. The Nice Lady in Red didn’t know the answer. In my office the fire marshals drop in annually to check the fire extinguishers and make sure fire exits are clear. If they happen to come when the office is closed they keep coming back until we are open. They are pretty insistent about making these regular inspections. If anyone knows the answer to this question I’d really like to know. Click on comments below to write your response. Thank you.
Posted by Knorr at 11:12 AM